Wedlocked
Not one to be held back by unfair legislation,
Sydney outsmarts the web of laws keeping her tied down and unable to get divorced.

Statement from the Director 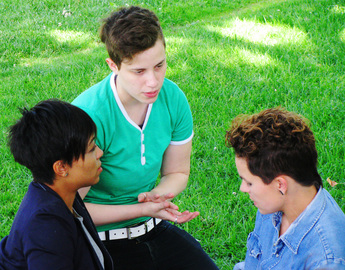 Puppett working with Shelli Boone (Sydney) and Whitney Mixter (Cameron) on the set of Wedlocked.
Wedlocked is a very personal story for me. I was engaged in early 2012, and my fiancée tried to convince me to elope with her in NYC, since New York had legalized gay marriage the year before. After our breakup in early 2013, I realized that had we eloped, we would have been stuck and unable to divorce until gay marriage was (re)legalized in California. Like many LGBTQ couples, I hadn't considered all of the implications of getting married in a state where same-sex marriage was legal while living in a state where it was not. Fortunately, Prop 8 was overturned in June of that same year.

Seeing my friends' lived experiences hammered home the vital importance of this topic that was going unconsidered and overlooked. I had a couple of good friends in Pennsylvania who were stuck in marriages: one for three years and one for ten. They both had new partners and had moved on with their lives in so many ways, and yet they were stuck. With kids and careers involved, it was quite unrealistic for them to uproot their lives and move for six months just to be able to start the divorce process (who knows how long it would take for the divorce to actually be finalized).

In 2013, while working for Los Angeles Mayor Antonio Villaraigosa, I had the honor of filming the first same-sex wedding in Los Angeles after the repeal of Prop 8, with the Mayor officiating the wedding. It was a beautiful ceremony, and the political importance of the occasion was driven home with a room packed full of reporters and flashing cameras. I bore witness to the regaining of marriage equality in California.

It was in 2014 that Producers Ally Iseman, Christine Moore, and I decided it was time to join the fight for marriage equality with a film about gay divorce. We wanted to give voice to those unspoken for and shed light on the black sheep topic of marriage equality, the need for divorce equality.
​
On June 26, 2015, (the two year anniversary of the repeal of Prop 8) in the landmark decision of Obergefell v. Hodges, the Supreme Court ruled that laws banning same-sex marriage were unconstitutional. This decision harkened back to a ruling from 48 years earlier, on June 12, 1967, when the Supreme Court legalized interracial marriage with its ruling in Loving v. Virginia. Like same-sex marriage, prior to the SCOTUS ruling, the legality of interracial marriage differed from state to state. Since 2013, the Supreme Court has cited Loving v. Virginia as a precedent in its decisions regarding same-sex marriage. The Supreme Court Justices see the connections between our past and our present, and so too must we. The more contemporary issues for gay marriage and gay divorce were in fact a way in which history was repeating itself. These connections made it imperative to me that Wedlocked feature an interracial couple. I wanted to acknowledge that part of our history and I wanted to honor the way in which the 1967 ruling on interracial marriages paved the way for same-sex marriage equality.

Before the June 2015 ruling, states had their own laws for same-sex couples, whether that be marriages, civil unions, domestic partnerships, or nothing. It was a country returning to a way of “separate but equal.” We must be mindful of the ways we are still on such a path. There is a war brewing against gender non-conforming people. Laws are passing state by state, and there is a new segregation underfoot. Differently-abled people get largely ignored in the broad movements for social change. Civil rights issues are intersectional and yet, too often, we fight for one thing at a time. We fought for our marriages and not our divorces. And now we're fighting for our bathrooms, and our jobs, and our lives. Let's remember the past, analyze the present, and fight for a better future, an inclusive intersectional fight for a better future.
Powered by